Since my 5 years in Sweden article (link is below) appeared in April, numerous comments have been posted on my blog and I’ve received heartfelt emails. While the reactions have varied, I appreciate the sincerity from my readers. A main focus of my story was the lack of job opportunities for me and foreigners in general

Recently, a good friend sent me an email about an upcoming lecture on the college campus of UCLA in late May. It immediately caught my eye as I enjoy reading about any facet of history regarding Sweden. The talk on May 26 is called, “THE BLUE AND YELLOW GLASS HOUSE: STRUCTURAL DISCRIMINATION IN SWEDEN”

The lecturer is Paul Lapalainen and he is the Head of the Swedish Government Inquiry into Structural Discrimination & Senior Analyst, Swedish Equality Ombudsman. What he has to say will be very familiar to some and surprise more than a few people as Sweden prides itself on EQUALITY yet his words are alarming and disheartening; showing that Sweden has a long way to go in regards to equality for all of its citizens.

How many of you know the story of the indigenous Sámi and the nomadic Roma peoples in Sweden? My uncle and aunt (in town this week) now know after they visited a local museum and learned about the oppression of this group.

Below are a few paragraphs from the email. Further down you will find two PDF links where you can read more on Lapalainen’s research and insight. He has shed a light on a subject that we must have more dialogue on! I encourage you to take the time to read them.

In the USA, our wicked racist past is well-documented although we have made tremendous progress in race relations in the last 50 years. We still have a significant distance to travel although there is hope for even more harmony and less discrimination in the next half century particularly with the leadership of our new President, Barack Obama; a man who has energized and brought people together in ways many never thought possible.

Will Sweden (and numerous other European countries) be bold enough to acknowledge and act on the problem of racism/discrimination so that 30 years from now we will find a more unified Sweden? If not, it’s frightening to think of what may happen if the “status quo” continues to rear its ugly head.

As a perpetual optimist, I am confident that things can and will improve as closing the gap on EQUALITY will only create a better, stronger and more competitive Sweden.

Don’t we all want that?

When it comes to civil rights, Lappalainen argues, Sweden has not come much further than the US of the 1960s. Equal rights are assumed to exist, discrimination is denied, and racism is narrowly defined so that it only applies to ideological extremists. Swedish authorities further perceive ethnic minorities in Sweden, including immigrants, as people to be helped, educated, trained, controlled and disciplined. The failure of many Swedes to recognize the role that institutional racism plays in Swedish society today is often based on an underlying belief that Sweden is different from other countries, particularly when it comes to human rights. While Swedish laws and policies have moved in the right direction, these perceptions limit their implementation.

However, just as in other countries, racism and discrimination are a part of Sweden’s history and culture. The oppression of the indigenous Sámi and the nomadic Roma peoples, as well as Sweden's establishment of the world’s first race biology institute in the 1920s, are clear indications of this. Denial of such problems has resulted in the failure to ban ethnic discrimination in working life, as well as other parts of society. Until recently, Sweden, like much of Europe, had ineffective symbolic laws at best, and at worst, authorities asserted that such laws were not necessary since equal treatment was mandated by their constitution.

Lappalainen, who has dual US and Swedish citizenship, headed a Swedish government inquiry into structural discrimination in Sweden in 2005 and currently serves as a senior analyst for the Swedish Equality Ombudsman. Born the son of Finnish immigrants to Canada, Lappalainen received his bachelor's degree in political science from UCLA in 1975 and went on to earn law degrees from Loyola University and the University of Stockholm. In this public lecture at UCLA, Lappalainen argues that Sweden's self-perceptions hide and deflect the focus from those with the power to discriminate and those who benefit from discrimination. The government inquiry that he headed concluded that institutional racism can be found in the labour market, housing, politics, the legal system, education, the media, and the welfare system. These conclusions contributed to the redrafting of Sweden's anti-discrimination law, which took effect January 1 of this year. Lappalainen will describe the power structures that exist in current-day Sweden and the concrete steps that have been taken, and remain to be taken, to ensure the civil rights of all people in Sweden regardless of gender, ethnicity, religion, sexual orientation, disability, age, and gender identity.
----- 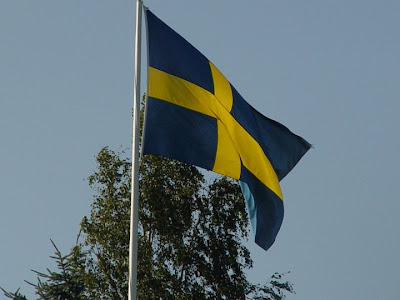 Sweden: In 2040, will the blue and yellow flag represent Improved Equality?
Posted by Gswede at May 18, 2009

As a Black American expat living in Sweden, I found your post to be very refreshing. This issue needs to be discussed objectively, without throwing stones. We can explain the cultural things, but the fact is that many Swedes are unaware of the terminology they use.

So, in the spirit of your blog, here's some real talk for Sweden:

NO, we would not say...
(ENGLISH) a colored man
(SVENSKA) en färgad man.
Unfortunately, this still appears in the local newspapers or on the radio. It doesn't help that the term "colored" is still used in South Africa, although they mean people of mixed race --- unlike in the USA where it was used in colonial times to describe the entire race. At any rate, the term "colored" in the USA has been considered derogatory since the about the 1940's. Please refrain from using it.

YES, we would say...
(ENGLISH) African-American woman
(SVENSKA) Afrikanskt-Amerikan kvinna
A Swedish friend told me that this label was too cumbersome to say in Swedish. "It's much easier to use "färgad" or colored in Swedish, why do you have to complicate it?" Hmmmmm. Please take a deep breath and use this term when you can.

No, we would not say...
(ENGLISH) Negro
(SVENSKA) Neger
This term is considered an ethnic slur since the 1960's, although it is close to the anthropological term describing our race, negroid. När Pippi Långstrump skrevs för länge länge länge sedan, ordet dök upp när hennes pappa beskrevs som "...den neger kungen" --- would not be written that way today. It's about as offensive as coming to a masquerade party in blackface. Please don't use the term "neger" in Swedish. And there are plenty of OTHER costumes to wear to a masquerade party.

Black Americans are not new in Sweden, but I now realize that many people in Sweden are unaware of these things. They have not been EXPOSED to them, just as many Americans have not been exposed to cheese sandwiches with cucumbers for breakfast. Including your's truly.

Considering the path leading up to the birth of many blacks today, our diaspora includes skin colors that vary from very fair to very dark, and everything in-between. Many black American families have roots in Africa. Many were torn from our families and sold for a few dollars at auctions on arrival in the 1600-1800's. We served in the field, in the house, and at war. Some of our black American ancestors were our slave masters --- some out of choice, some out of pain. Some were native Americans living in the hills who mixed with our freed slave ancestors. Others were kind, upstanding whites and asians who lived and loved together in secret. When it comes to our skin, tänk om kardemumman var kola sås. Mmmmmm, va gott.

Nice to always read your blogs. I have been very fortunate in my experience thus far; "knock on wood". Thank goodness for my current employer.

But reading your article does bring me to one particular situation that made me quite angry. I use to belong to SEB Paid my fees, kept my money there like everyone else. In the states I always used online banking as it's just more convenient.. So after 4 months of belonging to SEB I thought I would inquire about online banking. They informed me that I could not have an online banking account because I was not fluent in Swedish. I explained that my cohabitation partner is Swedish therefore I would not have a problem. They still denied me.

I personally felt this to be a form of discrimination and closed my bank account immediately. Now I am happily at Handelsbanken. Have a great day George.