Belgrade, Serbia - City with a Soul

In 2005, UNICEF in Belgrade hired me as a fundraiser for a farewell basketball event for Sasa Djordjevic, one of Serbia’s biggest sports celebrities. He was retiring from competitive basketball. After struggling to find quality work (including UNICEF in Stockholm) for close to one year, it felt good to be appreciated and hired for my sales and fundraising skills.

Having never been to Eastern Europe, I was excited to visit Belgrade, a city with a tumultuous history. My contract had me there for nearly two months.

I had 3 goals before my journey:

2) Explore and learn about Belgrade

My time was short (two weeks before sales deadline) for the first goal although I was optimistic I could close at least one sponsorship. That deal came in the form of a 10,000 Euro bank sponsorship. In addition, the entire fundraising team was very successful. I worked with a wonderful group of people at UNICEF who welcomed me with open arms.

Goal number two (explore) was a never ending adventure! The first weekend, a friend at the office took me to a spirited Friday night event where I met a diverse group of people including a woman who would become a good friend. She connected me to the inside world of advertising as well as numerous key connections around Belgrade.

Subsequent weeks found me racing to the last goal (have fun!) by enjoying the vibrant nightlife, walking in historic areas, watching a Jameroqui concert, working in Novi Sad (city outside of Belgrade), attending a music festival (thousands of youth), and meeting a plethora of interesting people.

I quickly felt a close bond to the city so I decided to have my own party after only one month. Some people laughed at me (in disbelief) when I told them I was expecting over 100 guests! In the past, I organized big parties in NYC along with plenty of social gatherings in Stockholm so I had no doubt that this one would be a success. I persuaded two dear friends from the USA to get a taste of this fine city - they arrived a few days before the party. Everyone had a blast, with close to 120 people dancing to soul and hip hop music all night!

The Novi Sad musical event was an exciting event to be part of. Young people came from various parts of Serbia as well as Eastern Europe for 4 days of extreme fun – listening to bands, dancing and embracing the moment. I don’t think I will ever experience such a mass of youth (over 150,000 attended) having the time of their life despite the rainy and muddy conditions.

Flying back to Stockholm and overlooking the devastating beauty of the city, I couldn’t help but wonder why the “Big Apple” of Scandinavia didn’t exude more of the energy and optimism of Belgrade. Stockholm could learn a lot from Belgrade – a city with a lovely soul.

From my short time there, most of the people I met appreciated what they had, hardly ever complained, lived life in the present moment and were fun to be around. In my opinion, that’s living a good life.

It was one of the best two months of my life. 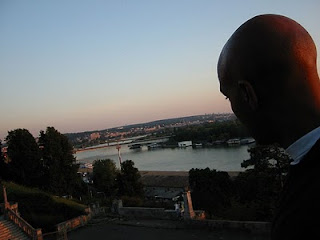 A "Moment of Truth" in Business

While working at a top entertainment firm in NYC, I had a "moment of truth" that would define my experience.

We had a new boss who was affable and a true salesman. I liked his style immediately as I could tell that he would give most of the sales staff two things they desired - a chance to shine and make money.

Not long after he began, I was called into his office. He said, "I want $100,000 in sales from you George and you have two months to close it". He was firm and crystal clear. I had strong prospects in the pipeline although in my mind, his deadline was very tight.

My focus became laser-like on the elements that would help me close this demanding goal as I knew I had to pass his test. It was one of my toughest moments in business and the goal was never far from my thoughts, day or night.

To make a long and challenging story short, I managed to close $106,000 before the deadline of two months. I was relentless, positive and persistent in making my goal and no time was wasted. The boss never bothered me after that and I had a wonderful time at the organization.  The lessons I learned from two of the best salesman I've worked with came in handy for this task - I wrote about them below (see link) in an article called "2 Salesmen, Simply the Best".

When you have a "moment of truth" in business or life, go after it with the same force as our Egyptian brothers and sisters went after freedom. Leave no stone unturned, stay positive and let nothing get in the way to your goals or dreams.

A "moment of truth" can make or break a career or personal life. For this frequently tough journey, make sure your mind is clear, your focus strong and your discipline high, thus giving you the best chance for success. 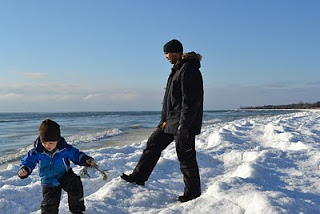 Gswede and son on the icy beach of southern Sweden
Posted by Gswede at February 20, 2011 No comments:

If you are a music lover and don't know the name above, you need to rectify that immediately.

If you saw her for the first time on TV (like me last year), you probably noticed the hair, style and beauty of this amazing artist. She's a sight to behold before she weaves her musical magic.

Her talent is uniquely powerful as was evidenced by winning the "Best New Artist" Grammy in the USA - the first time a jazz artist has won the award. She plays bass and has a magnificent voice. In addition, she is a favorite of President Obama - he chose her to play at his Nobel Prize ceremony.

I love music and when it comes wrapped in a package that is unique, soulful and soothing, it never fails to inspire me.  If you love music (especially jazz), I can almost guarantee that you will enjoy or be moved by Esperanza Spalding. 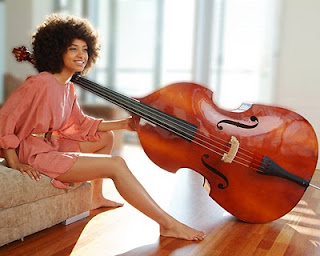 (www.esperanzaspalding.com)
Esperanza Spalding
Posted by Gswede at February 13, 2011 No comments:

A Lesson in Humility

I’ve written about a close friend on several occasions during the last 3 years. He lost his way since 1998 for a variety of reasons, most of that time living in NYC. Currently, he’s trying to climb back up the ladder of success in the Big Apple although his attitude and mindset are not in sync with reality, thus the climb will be extra strenuous.

His main problem is that he talks, sometimes incessantly about what he will do or wants to do, with money being at the core of his conversation, as if he is some hot-shot businessman. In addition, he dreams of making top money in finance yet fails to realize the hard work necessary for success in that arena – especially in today’s economic conditions. His words are not appealing to numerous friends and can be irritable to those who don’t know him.

Recently, I wrote him an email about a gentleman I met in the 1990’s who exemplifies humility. I thought my friend might be inspired by the way this man carries himself. I was inspired.

Parts of the email are below.

I was a member of a health club in NYC for 8 years. One of the moments I looked forward to the most was seeing Mr X (name not important) at the gym. He always had a smile, we talked basketball and he showed a genuine interest in me. I never knew much about him and that was okay.

After finding out what he did for a living, my opinion of him didn't change. He was the same likable guy.

Here's a moment when my respect for him grew even more:

The two of us were sitting with a group of people and I said (in a nice way), "great magazine cover I saw you on last week - and I mentioned the publication". He immediately played it down and was a bit embarrassed as those around him didn't know much about what he did. What a gentleman I thought - playing down his status. I felt a bit bad for saying it.

You may wonder what he did for a living. Well, he's one of the biggest finance guys in the USA. He's been on the cover of magazines and I have seen articles about him in the NY Times. At that time, he was making well north of 10 million a year! BUT he never talked about himself in any way or boasted. He was just a nice guy. The only reason I found out about his status was due to a friend telling me.

Be humble about what you do and be likable.

You have all the tools for likability but you must use them. It's what made me and others like you in the first place. Most people won’t care about BIG deals you fantasize about, money you might make or women you desire, etc, etc. What most do care about are kindness, compassion and being genuine. You have it. USE IT.

BE HUMBLE, KIND, COMPASSIONATE, and GENUINE. Make it your mission in 2011. 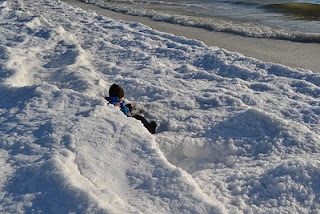 A southern Sweden "Beach of Ice" in February - Gswede's son taking a break.
Posted by Gswede at February 06, 2011 2 comments: