Reading to Your Child is Fundamental for Success

I believe most parents would agree that we never stop learning. This insightful  article (quotes and link below) from NY Times columist Thomas Friedman offers some good advice for parents regarding education.

First, a sad fact about America's young people. A quote:

"Every three years, the Organization for Economic Cooperation and Development, or O.E.C.D., conducts exams as part of the Program for International Student Assessment, or PISA, which tests 15-year-olds in the world’s leading industrialized nations on their reading comprehension and ability to use what they’ve learned in math and science to solve real problems — the most important skills for succeeding in college and life. America’s 15-year-olds have not been distinguishing themselves in the PISA exams compared with students in Singapore, Finland and Shanghai."
(http://www.nytimes.com/2011/11/20/opinion/sunday/friedman-how-about-better-parents.html)

Another quote on why the big differrence:

Reading to your child may come naturally and its benefits could seem obvious although it's clear from the study that many parents aren't reading to their children on a regular basis.  I know several educated parents who admitted to me that they rarely read newspapers, online articles or books, which surprised me. It's doubtful they are frequent readers to their young ones.

One of the reasons I'm a competent writer is that my mother and father were big proponents of education. On the nights I didn't have homework, my mother often gave me her own homework. In addition, I love to read and much of that stems from my parents. Because of their care, educational success was made easy and it sparked my curiosity about the world..

Currently, America is in a lot of pain, with millions unemployed and a bad economy. One way to bring back some of the pleasure is to make sure reading stays front and center in as many homes as possible. As this article suggests, one's background isn't necessarily a barrier in helping your child to succeed:

The performance advantage among students whose parents read to them in their early school years is evident regardless of the family’s socioeconomic background. Parents’ engagement with their 15-year-olds is strongly associated with better performance in PISA.”

“Monitoring homework; making sure children get to school; rewarding their efforts and talking up the idea of going to college. These parent actions are linked to better attendance, grades, test scores, and preparation for college,” Barth wrote. “The study found that getting parents involved with their children’s learning at home is a more powerful driver of achievement than parents attending P.T.A. and school board meetings, volunteering in classrooms, participating in fund-raising, and showing up at back-to-school nights.”

In our busy worlds, it would be beneficial for parents to sit back now and then , reflect and make sure we are giving our child the best possible opportunity for success. Reading more is an easy way to do that.

To be sure, there is no substitute for a good teacher. There is nothing more valuable than great classroom instruction. But let’s stop putting the whole burden on teachers. We also need better parents. Better parents can make every teacher more effective. 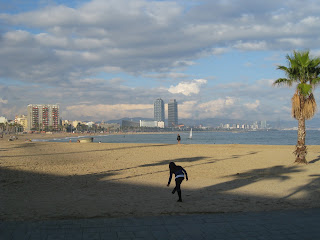 The beauty of Barcelona, Spain in November.

I'm frequently at a college university for my job.  The professor conversations, walks around campus and energy of the students are often inspiring. In addition, the occasional flow of memorable college flashbacks (25 years ago) brings a smile to my face.

One particular moment was exquisite. It occurred late one afternoon after my last sales appointment. I was about to enter a taxi.

Before I got in, the taxi driver and I simultaneously saw two extraordinarily beautiful women walking across the parking lot. Any man or woman would have looked at these college students as they were a stunning pair and would dominate any scene.

The moment was enhanced by the late afternoon sun and a pleasant autumn temperature of 10c (50F). In addition, the warm and perfect light dancing off the concrete, combined with the surrounding reflections and distant foliage was lovely.

And then it happened.

They stopped (as if choreographed) in the middle of the empty parking lot and turned towards the sun. As they pointed their faces upward and closed their eyes, they simply basked in the glow of the sun for what seemed like forever although it was probably only 15 seconds.

It was the essence of harmony.

If this was an Olympic Sport, it would be called “Synchronized Sunning” and this tandem would have easily taken home the Gold!  I’ve never been a fan of the actual sport (Synchronized Swimming) yet I can appreciate its beauty.

I had the urge to pull my camera (always on me) out yet I couldn’t take my eyes off this beautiful scene. The taxi driver was just as enthralled as I was.

After the ladies left, the driver and I simply smiled at each other and nothing was said. Nothing more needed to be said.

The moment was (in the words of poet John Keats), “A Thing of Beauty”. 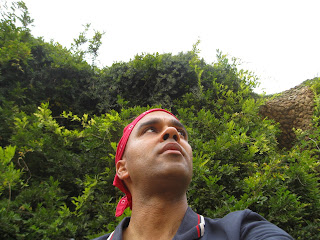 Gswede catching some sun at a lovely park in Barcelona, Spain.

To Stretch or Not to Stretch

Below is a quote about stretching:

If you’ve never stretched, though, don’t feel obligated to begin now, Dr. Herbert says. “There is little evidence that stretching does anything important,” he says, “but there is also little to be lost from doing it. If you like stretching, then do it. On the other hand, if you don’t like stretching, or are always in a rush to exercise, you won’t be missing out on much if you don’t stretch.”
http://well.blogs.nytimes.com/2011/11/16/the-right-reasons-to-stretch-before-exercise/?src=me&ref=general

Although it seems as though stretching doesn’t do anything beneficial, consider this scenario:

At a New York City party in SoHo over a decade ago, a good friend casually mentioned to me that he was playing basketball the next day.  I didn’t think much of his comment at the time as the party was lively and festive. As I was leaving, I said for all to hear “Make sure you stretch your achilles”.

He laughed it off having never been seriously hurt and only in his early 30’s. The next day, he tore his achilles tendon.

Do you think he stretched? Of course not. When I’ve asked those who have torn their achilles if they stretched beforehand, there was rarely a positive response.

My friend might have been injured anyway although stretching in this instance may have prevented 2 months on crutches. I could only chuckle when I saw him limping around after since I did give him ample warning.  I’ve always stretched my achilles before playing basketball or any other sport and I believe it is one of the reasons I’ve never injured it.

As a former division 1 basketball player, I was taught early on to stretch and do a light warm-up before taking the court. The stretching frequently made me feel better and more limber. Surely, there has to be some benefit to that.

The real key to avoiding an injury with running or sports in general is to know your body, compete within your limits and be careful not to injure yourself because of carelessness. Below is a quote and link from a previous article:

A message to all 40 something’s or older – stay within your abilities or comfort zone when competing athletically and don’t try to act as if you are twenty again. I have seen numerous people injured (often with pain for years) simply because they trained or competed as if they were still in college. A woman in my hometown was playing softball and ran the bases as if she was a track star; she never made it to home base and died. If she had run easily and comfortably, she might be on this earth today. Quality of life should be important and as we get older there needs to be a focus of sound judgment in any chosen athletic endeavor or you could have an aching knee or bad back for the rest of your life.
http://gswede-sunday.blogspot.com/2009/07/45-is-new-35not-25.html

There has never been a moment in any type of sport/activity where I wasn’t aware of my body and competing in the proper way, especially with regard to my knees and back – areas if injured, can limit one’s life in a major way.

I’m less than three years from 50 and my body has rarely felt better.

One final thought on avoiding injuries in your day to day life; a quote from my article called “Avoid Injuries Due to Your Own Actions:

Remember the following story the next time you find yourself near ice:

In 2003, Dr. Atkins was enjoying the moment particularly because his controversial weight loss philosophy was finally getting the respect he thought it deserved. He was in his early 70's and life was good.

As he was walking down a New York City street, he slipped and fell on ice. He suffered a severe head injury and never recovered. He died just as the glory was shining upon him. What a shame.
http://gswede-sunday.blogspot.com/2010/02/avoid-injuries-due-to-your-own-actions.html 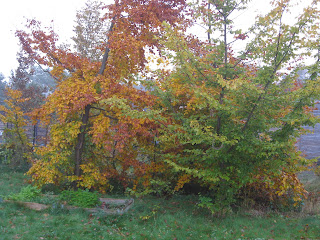 The October Foliage at our country home in Sweden.
Posted by Gswede at November 06, 2011 4 comments: