Why I Went to Egypt


With all the unrest and rebellion in Egypt over the last few years, I cannot say that I wasn’t worried about taking my family there last month.

Below are several reasons why I decided to go:

Many American friends warned me not to go or showed great concern. I understood their feelings as most had never been to that part of the world, so their only framework was from TV or the news.

Upon arriving in Egypt, the passport guard wasn’t pleasant and asked me sternly, “Where is your home country”. I said Sweden as I am a Swedish Citizen, although that is not the answer he wanted. He asked again. This time I said the United States. He let me through but never took that scowl off of his face.

I didn’t let his spirit deter my spirit as I figured he must be having a bad day.

Our time in Egypt couldn’t have been better other than the temporary sickness of one child – something many families experience in Egypt.  The men (only saw a few women workers) once again treated me as if I was one of them, often saying “You look like Egyptian man” or “We love Obama” or similar wording.

Everywhere I went at the resort, I was greeted with a smile and often engaged in stimulating conversation. One guy told me that he has worked 11-12 hours a day for the past month, although his demeanor couldn’t have been more positive. He also said, “The first chance I get, I will leave Egypt”, after I inquired about his desires in life.

The trip provided much needed fun in the sun for my wife and kids as the resort was terrific! The conversations were always interesting and gave me great insight into this complex country.

I hope to see Egypt for the third time, sooner rather than later. 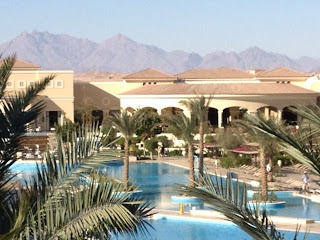