If It's Violins She Loves, Let Them Play

Compliment what she does

I love that song and those words......Just Because.

When is the last time you sent a note, gift or postcard "just because"?

How about flowers, a hug or words of appreciation to a loved one?

Or a smile to a stranger or a compliment to a friend?

Or a call/email to a person you have lost contact with "just because"?

Since I have been in Sweden, I can count on two hands the number of people who have reached out to me of their own volition. I understand the “out of sight, out of mind” philosophy, yet that never stops me from contacting a good portion of my USA circle "just because". And it never fails to touch them.

I encourage you to do more things (anything) "just because".  It’s an easy way to bring more love and warmth into our complex world, not to mention yours. Start with doing something once a month and progress from there.

It doesn’t have to be big or take much time; it only needs to be sincere. One of the best emails I ever received was from a close NYC friend, a year after leaving the Big Apple for Sweden. It said:

"Just thinking about you G, how are you".

Very simple, yet one I have never forgotten.

A Dream Fulfilled, A Wish Denied

In high school, I was extremely fond of a lovely girl who attended a school nearby. She had everything I liked (and then some) and I wished for nothing more than for us to be a couple. I tried and tried, yet something was always holding her back.

Fortunately, I was a popular basketball star, so the constant disappointment of never getting close to her was always short lived, as the team occupied most of my time.

We talked on the phone often, yet rarely spent time alone. I thought that maybe it was my color holding us back, although the special moments we did share left no doubt about her sincerity.

Connecting with her in 2011, after many lost years was refreshing. She brought up the subject of why she kept her distance during our teenage years – namely the racism of her mother.

Below is part of an email she wrote.

So I came to a decision that you and I couldn't see each other anymore because I was afraid I would get caught. It was one of the worst things I've ever done and I have always felt bad about it and regretted it. I felt you deserved a girlfriend who you could be with without all of the crap and hiding that came with me.
--
That day my mom said I could not see you made any choice I made the wrong one.  She put me in a trick box and then several years later she wanted to do it herself. And honestly it would not have been so maddening if she had said to me “look, I met this guy who is black, I realize I told you that you couldn't date a black man and I was wrong. Do you mind if I give it a go?”

She didn’t and took a chapter of my life and stomped all over it as if it didn't matter.
--
But this one hurts the most because I really really really liked you and yet I could not.
--

I let her know that I understood why she stayed away as it was obvious from the tone of her writing how painful it was for her to have a mother dictating her early years. No child should have to endure that type of pressure.

Since my formative years were free of any significant racism, I’ve sometimes wondered how my world would have been impacted, had I known about her mother’s distaste for me.

I’d like to think I would have handled it calmly, like subsequent racial incidents I’ve experienced, although I’m not so sure. If I had known, my future actions and/or thoughts may have been profoundly different.

I had one Major Dream in high school – to become good enough at basketball to obtain a Division 1 college scholarship. That was fulfilled. I had several wishes during that time, with one being my desire for her to be my girlfriend. That wish was denied.

I had a wonderful childhood, experiencing life in the way I wanted, with education, family and basketball being my main priorities. Other than her aloofness, everything went as planned for me. For that, I’m grateful.

Maybe it was a good thing we were kept apart, as it allowed me to deal with rejection/struggle early on and learn an important lesson I would never forget – “You can’t always get what you want”. 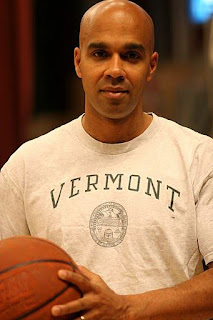 Basketball has helped me to fulfill many of my Dreams.
Posted by Gswede at September 15, 2013 1 comment: