We Have a Winner.....(Los Angeles Lakers)

If they were giving out Oscars for the "Best Trades of the NBA (National Basketball Association) off-season", the Los Angeles Lakers organization would have won at least 2 Golden Statues - signing two-time MVP Steve Nash and All-Star Dwight Howard!

Now that the dust has settled and the Laker haters/doubters have had a chance to adjust to these two GREAT signings, I wanted to give you some insight about what this means for the Lakers. Since I bleed Purple & Gold, I thought it was better to read an unbiased opinion of the deft moves by my favorite sports team - the mighty Lakers.

My good friend Sean, is a passionate Philadelphia 76er's fan yet he called me recently about the Lakers.  As a basketball fan, he was impressed at their ability to improve their already solid team.  Sean appreciates teams who boldly and consistently do what it takes to improve and compete for championships.

In addition, his analysis of the trades and what it means for the Lakers is spot on.

I will make this prediction.  If injuries are kept to a minimum, my Lakers will be in the NBA finals, most likely facing the Miami Heat in what would be a dream matchup in June 2013.

For the aforementioned haters/doubters, enjoy my twist on a Kanye West song called "Good Life":

Kobe told me go ahead and switch my style up
And if they hate
Let em hate
And watch the championships pile up!

For everyone else, enjoy Sean's article below called "We Have a Winner",

The Los Angeles Lakers have emerged as the winner's of the Dwight Howard Sweepstakes.  Those of you who are clouded by your disdain for the Lakers to think that this trade doesn't equate to another title run are allowing your emotions to impact your ability to reason.  I am a Philadelphia 76ers fan, but most importantly I am a basketball fan and Mitch Kupchak's ability to orchestrate this trade was superb for many reasons.


First, let's make one thing clear, having a legitimate big man to anchor your defense has and continues to be the best blueprint to compete for a title.  I know some who disagree with this thought process will quickly evoke the success of the Miami Heat without a dominant big man, but remember, until Chris Bosh was reinserted into that lineup after his injury the Heat were being challenged by an aged Boston Celtics team. Even with Bosh they were pushed to seven games because of the play of Kevin Garnett (a dominant big man).  Dwight Howard is the best center in basketball with the kind of stamina that KG no longer has!


What LA has accomplished is adding the most physical inside presence in the NBA to their already championship experienced lineup.  Think about how both Oklahoma City and Miami strategically attack teams by repeatedly going to the rim.  Sure, Kevin Durant is the game's most lethal perimeter shooter yet, Harden, Westbrook, and the others on that team attack the rim which has played a huge role in the team's success .  The same can be said for Miami's James and Wade.  They are at their very best when in attack mode.  As a matter of fact, Lebron's ability to post up defenders this season is one of the biggest reason for both his and the team's success.  With Dwight Howard manning the middle those two teams I have mentioned will no longer have the ability to leisurely attack the rim against LA.  Oh, and don't give me the argument that the Lakers had Andrew Bynum and that did not deter OKC from attacking them.  I am assuming that many of you already know just how much more athletic, physical, and an all around better player Howard is compared to Bynum.  Besides, Bynum's limited success when he was healthy and on the floor can be directly attributed to the presence of "The Black Mamba" and Pao Gasol.

The addition of Nash and Howard has essentially added a few more years to Kobe's career.  Nash takes the pressure off of Kobe to run the offense and create shots for the team as well as himself.  Nash still has the range to make a difference from the perimeter, and now will get uncontested shots having Bryant, Gasol, and Howard playing with him.  If you need an example for what I just explained, see Jason Kidd and his success with Dallas last year!  Nash is arguably still one of best 'pure" point guards in the game in terms of his ability to run an offense.

Howard's presence ensures that Kobe will have more room and freedom to operate, and another more than capable option to defer to when needed.  Furthermore, the fact that LA did not have to part ways with Gasol to consummate this trade was brilliant.  Kobe once said that Gasol was one of the best players he has ever played with.  How much more effective do you believe Gasol is going to be having a presence like Dwight Howard playing next to him?  Lastly, I'm sure many of you have completely overlooked the talent and skills of Ron Artest here.  Artest will be comparable to what Dennis Rodman represented to MJ and the Bulls during their run.  Artest is a menacing defender, both physical and irritating, and has demonstrated that he is more than capable of hitting big shots when needed (ex., the Lakers last championship season).


Miami has no front line to match what LA now has put together (Bosh and who?).  Are any of you bold enough to take an OKC front line of Serge Ilbacca and Kendrik Perkins over Howard and Gasol?  For those Bulls fans reading this, prior to Derrick Rose blowing out his knee from quite simply a tremendously stupid coaching decision by having him on the floor in a game that was already decided, your team minus injuries had the talent to challenge the Heat.  During the regular season the Bulls essentially had their way with the Heat.  Unfortunately, because of the injury to Rose and the uncertainty of what the impact will be on his speed and explosiveness, the Bulls cannot be considered as championship contenders.  Thus, barring any significant injuries to Gasol, Bryant, or Howard this trade means that LA now becomes a more than legitimate threat to dethrone Miami for the NBA title next season.  Once they develop chemistry as a team, (which by the way will not be remotely close to what Miami went through when they meshed James, Wade, and Bosh because Howard does not need to control the ball to be effective like the aforementioned do),  LA could win 70 games. 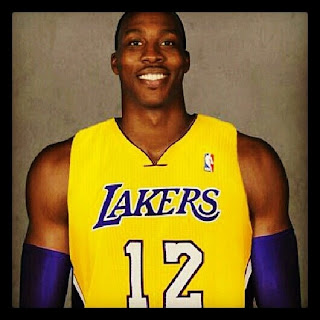 Superman aka New Laker Dwight Howard
Posted by Gswede at August 12, 2012 No comments: