On this USA Father's Day, I wanted to share an article (below) I wrote 4 years ago on this very same day.

I'm grateful that I have a caring and beautiful family and the love that surrounds me keeps my soul shining! In addition, I'm thankful for all my male friends (most are fathers) who I count on for wisdom, inspiration and support.

Happy Father's Day Gentlemen. I hope your day is filled with a big spoonful of love and gratitude!

On this American Father's Day (November in Sweden), thoughts of fatherhood are swirling in my head.

--- I will never forget the speech that a dear friend gave in Pennsylvania at the funeral of his father. It was eloquent, funny and moving. His words helped me tremendously when only a few years later I was in the same position. He continues to inspire me.

--- Many of my friends have had children from 2005 -2008 and most of them are good fathers (not all unfortunately). Those who do not take fatherhood seriously tend not to spend enough time with their kids and/or don't put the child's best interests first. They run life on their terms and the kids have to fit in. What a shame.

--- A childhood friend in Boston has inspired me as a person and as a father. His young son has a serious illness that will take several years to cure although he is doing better now. I think of his entire family often. They have overcome some huge obstacles over the years. I cannot imagine the pain of seeing one's precious child experiencing such an ordeal.

-- Two of my friends in Sweden take the father role seriously. One has a daughter that is wise beyond her years. On my first day of substitute teaching a few years ago, she helped me organize and maintain composure in the classroom. She was 9 years old! The second speaks of his daughter in such a loving and passionate way. I have never heard someone show such emotion when talking about a child.

--- The best boss I ever had is a wonderful father. We have had some enriching conversations throughout the years. If you were to see him with his two daughters, there would be no doubt in your mind about how he is as a father. He has inspired me from the moment we met.

--- In late 2005, during the Xmas holidays, one of my childhood friends (and loving father of 3) sent me an email about his father being sick. It was like a dagger to the heart as I truly felt for him especially since I had recently lost my father. His father died not long after his message to me. What I loved about his father was the pure joy and pleasant nature he exuded! He was a kind and decent man and I always felt better after being in his presence.

--- Since an early age, I have had the privilege of spending time with and learning from one of my mother's cousins (like an uncle to me). He consistently looked out for me in my career and his success in business and life was invaluable to witness and hear about. His three lovely daughters are very fortunate to have him as their father which I am sure they know.

--- My first basketball coach has been like a father to me. Without his care and teaching, I would have never reached the Division 1 heights in college basketball. In addition, his life lessons during my teenage years were very helpful. It brought me sincere joy to bring him over to Sweden from 2005-2007 to inspire youth utilizing basketball as a tool.

--- My college basketball teammate is one of my dearest friends and seeing him around his kids has been refreshing for me. I learned a lot from him before I had children regarding the tough task of raising kids. He was always frank with me and didn't sugarcoat his words which I appreciated. I admire the father and man that he is.

--- One of my most interesting friends in NYC lost his father last year. I only met him once but it was memorable. He was smart, cool and very hip for being in his 70's. Everyone enjoyed his company on that summer Manhattan night.

--- My high school basketball coach died in March 2007. He was instrumental in preparing me for the rigors of college basketball. He was 54 years old and had two sons. After speaking to him in January of that year, he gave me some fatherly advice. He said "don't push your son into sports if it is not something that he wants to do". Important words for any father to hear.

--- The godfather of my son is a gentleman that I have known less than 5 years although it feels like I have known him for 20 years. He is a good father and godfather and someone I always enjoy being around. He has 3 boys so his insight and candidness about fatherhood have been important to hear.

-- My father had a stroke in 2003. The last time he was conscious was on Father's Day 2005 when my mother and cousin read a letter to him that I wrote about fatherhood. I got choked up hearing about his reaction as I was in Belgrade, Serbia at the time. He died in July 2005. He was a good man and good father. As the years go by, I realize how much I learned from him and how comforting it was hearing his voice.

Writing to a few friends this morning, I conveyed that we must all continue to be be strong, value oriented, disciplined and loving fathers that spend as much time with our kids as possible. In addition, our children's best interests and well being should always be at the top of our agendas.

We can even learn from the far too many absent and non-caring fathers that surround us. I witnessed quite a few growing up and I instantly knew that I didn't want to be like them.

It is important to have one or several father figures or mentors in your life. If you do, talk to them, observe them and learn from them before and after you have children. If you don't, be diligent in finding one because life can be tough without the wise counsel and care of people outside of mom and dad.

My mentors continue to inspire and benefit me.

Honor your father on this day and everyday. The best way to do that is by being a good man, a good father, a good husband, helping others and continuing to evolve as a person.

One never knows how long our father's or mother's will be around. 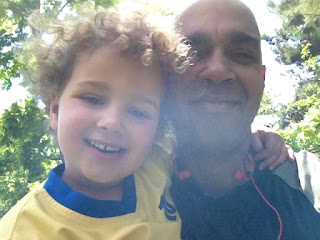 One of Life's Most Important "Quotes"

I love quotes and have shared some of my favorites throughout the years. Three articles are below:

A Magnificent Quote from the 30th President of the United States

The quote below is one of life's most important as it sums up nicely what is essential to a quality well being and to making a difference in our global world.

It's not only essential to live by these words but one should also be surrounded by those who share the love of kindness.

Can you imagine how much better the world would be if we could all be just a little kinder to one another?