I love a GREAT vibe.

It rarely happens when I stumble upon or visit a new place although when it does, it fills my soul with immense pleasure.

My wife took me on a 24 hour getaway without kids (yes!). It was one of her birthday gifts to me.  The spa/hotel was called Varbergs Kurort – a lovely place in western Sweden.

The lobby was relaxed, warm and friendly upon arrival. Everything flowed nicely as we checked in, enjoyed a cool drink and strolled around the property. The vibe was good.

After we came back from our late afternoon dip in the sea, we settled down in comfortable chairs for more drinks and an early dinner. The music came on and that is when the vibe went from good to great!

Good music is as important as anything else when it comes to creating atmosphere. If it’s good, it adds a dynamic dimension to a hopefully already good scene.  If the music is bad, the moments and vibe can burn out quickly.

The playlist at Kurort was perfect – soulful and smooth. It was the kind of music that even those who don’t appreciate or like music wouldn’t mind. It was never in the way, only beautifully soothing.

If we didn’t have to go to a terrific concert (Veronica Maggio) that night, we would have undoubtedly stayed there another couple of hours, soaking in the surrounding elements and enjoying the beauty of day.

Can’t wait to experience it again. 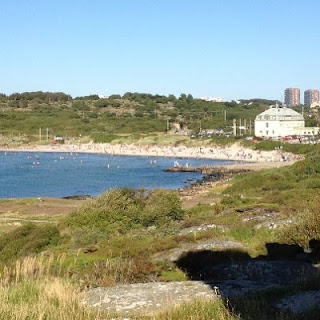 View of Kurort from the Lighthouse - Varberg, Sweden
Posted by Gswede at July 29, 2012 1 comment:

Joe Paterno – From “Success with Honor” to SHAME

Like many sports fans, I admired Joe Paterno (JoePa as he was affectionately called), the late Penn State Head Football coach.

He was the epitome of everything that was right in college sports. His teams excelled, players graduated and negativity avoided “Happy Valley”- a Penn State slang term that doesn’t seem as appropriate in 2012.  In addition, former players, opposing coaches and business leaders often shouted his praises from the mountaintops.

I grew up in Central Pennsylvania and could get to the university in less than two hours. My state was CRAZY about Penn State Football! I’ve also known alumni and visited the campus on many occasions.  The topic of football frequently came up during those times and nothing but positivity emanated from any conversation about the program or the Head Coach.

Paterno was viewed as a Great Coach, Man and Leader. And since he never had any serious scandals (unlike many other college programs), the term “Class Act” and “Man of Integrity” was often applied to him.

Most opinions (including my own) of Paterno have changed dramatically since a damaging report was revealed to the world Thursday. After hearing Louie Freeh (former FBI Director) talk about his independent 8 month Penn State investigation of the Jerry Sandusky Case, I doubt anyone would use words like classy or integrity in the same sentence with JoePa.

"Our most saddening and sobering finding is the total disregard for the safety and welfare of Sandusky's child victims by the most senior leaders at Penn State," Freeh wrote in his summary of his report. "The most powerful men at Penn State failed to take any steps for 14 years to protect the children who Sandusky victimized. Messrs. Spanier, Schultz, Paterno and Curley never demonstrated, through actions or words, any concern for the safety and well-being of Sandusky's victims until after Sandusky's arrest."
Sports Illustrated Article

Even those who staunchly defended Paterno are changing their tune. Nike CEO Phil Knight – a long-time friend of JoePa, spoke at his memorial (before this report) and gave a passionate speech defending Paterno.  Below are Phil’s recent words and the immediate changes at Nike speak volumes about how they feel now.

“Other than my parents, my college coach, Bill Bowerman, was the biggest influence in my life. Bill Bowerman and Joe Paterno shared some great qualities. Throughout Joe Paterno’s career, he strived to put young athletes in a position to succeed and win in sport but most importantly in life. Joe influenced thousands of young men to become better leaders, fathers and husbands.

According to the investigation, it appears Joe made missteps that led to heartbreaking consequences. I missed that Joe missed it, and I am extremely saddened on this day. My love for Joe and his family remains."

Nike also announced that the child-care center at its corporate headquarters would no longer be named after Paterno. Nike president and CEO Mark Parker announced the move in another statement.

"I have been deeply saddened by the news coming out of this investigation at Penn State. It is a terrible tragedy that children were unprotected from such abhorrent crimes. With the findings released today, I have decided to change the name of our child care center at our World Headquarters. My thoughts are with the victims and the Penn State community."
http://espn.go.com/blog/bigten/post/_/id/53036/phil-knight-issues-statement-on-joe-paterno

I can’t fathom how Paterno and the other three men could have shown such disregard for the lives of those innocent boys and their families. Even Bobby Bowden of Florida (2nd most wins in college football after Paterno) said that he would have wanted to ask Joe WHY he concealed a monster like Sandusky.

I played Division 1 basketball so I’ve seen what attention and adoration can do to the egos and mindset of players and coaches. Often, it’s not positive. Also, I can understand (yet not condone) other acts that have been done (cheating, paying players ,etc) in collegiate sports although I never thought in my lifetime that I would be reading about 4 grown men at one of college football’s most prestigious programs, covering up for a suspected paedophile.

"But combine that fact with what we already knew. In 2001, graduate assistant Mike McQueary told Paterno he saw Sandusky raping a boy in a shower at Penn State's football complex. Paterno, Spanier, Curley and Schultz -- already aware of suspicions that Sandusky was a child molester -- did absolutely nothing. The two most powerful men on Penn State's campus (Spanier and the late Paterno) and two more on the upper end of the totem pole did nothing to help the child involved in 2001, nothing to stop Sandusky."

The janitors at Penn State also bear some responsibility as one of them witnessed Sandusky raping a young boy and did NOTHING. A few details are described in Mike Lupica’s (Daily News) article below:

“They (the janitors) witnessed what I think in the report is probably the most horrific rape that’s described,” Freeh said Thursday.

“And what do they do? They panic. The janitor who observed this said it’s the worst thing he ever saw. This is a Korean War veteran who said, ‘I’ve never seen anything like that. It makes me sick.’ He spoke to the other janitors. They were alarmed and shocked by it. But what did they do? They said, ‘We can’t report this because we’ll get fired.’ They knew who Sandusky was. They were afraid to take on the football program."
Mike Lupica's Daily News article

I almost wrote about Paterno, his three conspirators and Sandusky in late 2011 when the scandal was at its boiling point but decided to wait as all the facts weren’t out yet. As the most powerful man at Penn State, I (like many) suspected that Paterno knew more than what he was saying although at that time, there wasn’t any evidence to prove it. There is now.

Their acts to protect Sandusky and lack of action for these boys were disgraceful and inexcusable.

One final passage from the Sports Illustrated article:

"The real downside, as anyone with a soul knows, is that more children were abused. That is the ultimate tragedy, but Spanier, Paterno, Curley and Schultz weren't worried about children. They were worried about themselves."

Regarding the victims and their families, let’s let all our hearts go out to them with the hope that they are beginning to heal and find a bit of peace now that Jerry Sandusky will go to prison for the rest of his life.

Because of this case, I’m hopeful that other colleges/schools will be more diligent and forthcoming when suspicions arise or they are confronted with similar issues as only a naive person would believe that this type of abuse is not happening elsewhere.

“Success with Honor” was a Paterno motto and often used to describe his program. What a joke his words seem like now.

His famous quote is below:

Success without honor is an unseasoned dish; it will satisfy your hunger, but it won't taste good.
(Joe Paterno).

His legacy is forever tarnished and can be described in one five letter word. SHAME.

Joe Paterno Statue - I can't imagine that Penn State would keep this standing.
Picture Link
Posted by Gswede at July 15, 2012 No comments: