Bilingual is Beneficial – Are you Hindering your Child?

Before and after I became a parent, I witnessed something far more frequently than I ever thought I would. What surprised me were parents NOT speaking their mother tongue to their children

Whether it was a Swedish parent living abroad or an American parent in Stockholm, I was puzzled (and still am) as to why they would hinder their child by speaking their 2nd language to them.


For Swedes who live in the USA or outside of Sweden, I understand the ease of speaking English or the local language with their mixed child although the comfort seems more for the parent. Is the parent embarrassed?

Hearing from a highly educated American parent (who lives here) about how she speaks her 2nd language (Swedish) to her child was shocking. When I asked why she did that, she replied that it was “easier for my child” and she wanted her to be “comfortable” as Swedish was the primary language spoken at the day-care.  As many people know, children can easily handle two or more languages and are often proud of it.

Maybe the opinion of this neuroscientist and her research may help those who fall into this category:

Q. Many immigrants choose not to teach their children their native language. Is this a good thing?

A. I’m asked about this all the time. People e-mail me and say, “I’m getting married to someone from another culture, what should we do with the children?” I always say, “You’re sitting on a potential gift.”

There are two major reasons people should pass their heritage language onto children. First, it connects children to their ancestors. The second is my research: Bilingualism is good for you. It makes brains stronger. It is brain exercise.
NY Times Article - "The Bilingual Advantage"
Here’s what an American woman (married to a Swede) with two children wrote to me recently:

"George - Giving kids multiple languages is such a gift - I think the persistence of speaking your mother tongue to them (even if they reply in their other language) pays off and is something they will be grateful for in the long run.  A great bonus that it helps their brains in other ways as well."

The “replying in their other language” is something that can throw a parent off as maybe they feel a need to speak the primary language of the child.   My daughter speaks mostly Swedish to me and only Swedish to everyone else, yet I would never deny her the English language in return.

I’ve also heard about the extremes cases, where one parent’s language was forbidden in the household.  Such an act takes “Denying of a Language” to another level - a shameful one in my opinion.

One can’t help but feel for those people affected by the aforementioned selfish act; having to continuously explain why they don’t speak the language of one of their parents.

Parents or Mom’s/Dad’s to be, don’t take the wonderful gift of another language away from your child.  As parents, we are supposed to give our children every chance to learn, improve and succeed in life.  If you snatch this opportunity from them, you are not only hindering their progress, but doing so in those all important formative years.

Remember, it makes “brains stronger” and it “connects children to their ancestors” as the neuroscientist so eloquently said.

That should be incentive enough for any parent. 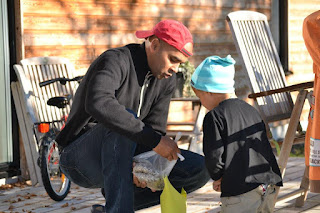 A weekend moment with Father and Son

Good Blog G. It is sometimes just easier to give up and speak the one language, especially when it is something important, but I will be persevering with Ella. All kids are going need to learn English at some point so why not give them a head start? I have a couple of Danish neighbours who try to speak English to their children even though to neither is it their Mother tongue. Kids are like sponges at this young age so take advantage. R