Inspiration from NOT Being Called on Stage

The early days of January 2009 were wonderful yet challenging. We were the proud parents of a month old baby girl and my wife was in the beginning of her maternity leave. The tough moment for both of us was my upcoming work conference which typically takes place in mid January. I had to be away for four days, leaving my wife to handle the responsibility for a newborn and our then almost 2 year old son.

The conference took place in Lisbon, Portugal (I know, not a bad place to be) and I wasn’t in a particularly festive mood as I missed my sales target for 2008. I could have taken comfort in my efforts that year because I was on parental leave for the first three months of 2008 – our key selling season.

I didn’t. Nothing is comforting to me about not hitting target.

I did take comfort in stabilizing important “building blocks” for future growth in my territory, yet all that lingered in my mind was the missed target.

Throughout our meetings, I couldn’t help but notice that one particular salesperson knew the product extremely well and had insightful and frequent comments at each session. What was most impressive was that he was young and a NEW salesman at the company! I was inspired.

At the annual awards dinner on a lovely Lisbon evening, I wasn’t surprised when he won one of the top awards for 2008, achieving 22% over his goal. The applause as he accepted the prize on stage was both heartfelt and well deserved. Again, I was inspired.

His moment in the sun was profound for me as I don’t recall ever being so inspired by the success of someone I didn’t know. His joy along with his wide smile as he walked on stage was infectious! That positivity exploded inside of me and I began to set my sights on 2009.

Soon thereafter, I said to myself, “George, I am going to be on that stage next year”.

The hard work, displine and focus began to payoff dividends almost immediately and by the summer of 2009; I knew my year was going to be strong. There was dogged focus on key elements to make my sales target and I was laser-like in going after other elements of my goals.

In addition to my commitment to success, I was fortunate in that there were few customer aspects that didn’t go my way or end on a positive note. 2009 was a fantastic year for me! I was well north of 40% over goal.

What made my success in 2009 that much sweeter was achieving it in only 8 months of work as I was on parental leave from late August 2009 to early February 2010.

The 2010 January conference was in Monte, Carlo, France – a place of great beauty. Since I was on parental leave, I could only attend for the day of the gala awards dinner. I was in the country for less than 24 hours yet happy to be there because I wanted to be with my colleagues to celebrate our team success! It was a joyous occasion as every member made their sales target.

During the evening, I knew I had a chance to win a top award with my high percentage over goal. It was a great year for many teams throughout Europe/Midde East/Africa so I expected any award to be won by a close margin. To my surprise, I won “Rep of the Year” – the annual award given to the top salesperson and the biggest honor of the evening. The euphoria inside my body was surreal. It was a sparkling moment and one of the brightest in my business career.

After the awards ended and the dancing had begun, one of the first people to congratulate me was the aforementioned salesperson. We shared a nice moment.

Sometimes in life, one must go through a little pain to get to a bigger pleasure. 2008 was painful as I have rarely missed a sales target in my long and diverse sales career. 2009 was one of the top pleasures of my life – a year I gain strength from.

I don’t know if I would have reached the heights of success in 2009 if it weren’t for the inspiration in Portugal from the young salesperson and for “not being called on stage”.

Inspiration is a beautiful thing. 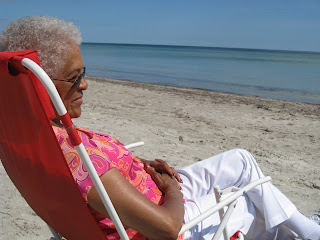 My mom in southern Sweden on a recent visit - A lifetime of inspiration for Gswede!
Posted by Gswede at June 05, 2011