When I first read about these two women, I was beyond surprised as I had never heard of something "so utterly inhumane" as Bob Herbert of the NY Times wrote this past week.

If ever there was a punishment that DIDN'T fit the crime, it's this one. Keep in mind as your read the paragraphs below, that there have been murders in America released from prison in less than ten years.

Here's a snippet from the article about this severe injustice:

It was not the kind of crime to cause a stir. No one was hurt and perhaps $11 was taken.

They were convicted by a jury and handed the most draconian sentences imaginable — short of the death penalty. Each was sentenced to two consecutive life terms in state prison, and they have been imprisoned ever since. Jamie is now 38 and seriously ill. Both of her kidneys have failed. Gladys is 36.

This is Mississippi we’re talking about, a place that in many ways has not advanced much beyond the Middle Ages.

The authorities did not even argue that the Scott sisters had committed the robbery. They were accused of luring two men into a trap, in which the men had their wallets taken by acquaintances of the sisters, one of whom had a shotgun.

It was a serious crime. But the case against the sisters was extremely shaky. In any event, even if they were guilty, the punishment is so wildly out of proportion to the offense that it should not be allowed to stand.
http://www.nytimes.com/2010/10/12/opinion/12herbert.html?emc=eta1

Not only is a sentence like this completely ridiculous, it's an outrageous waste of taxpayer money.

Mississippi Governor Haley Barbour should do the honorable thing and release these two women. If not, this inhumane sentence will continue to shine an unfavorable light on a state that has had more than its share of darkness.

One of these dark moments was the murder of civil rights leader Medgar Evars:

Dropping out of high school at 17 to join the army, Evers served in World War II. Returning home, he finished high school and later graduated from Alcorn A & M College. After working at Magnolia Mutual Insurance, one of the few black-owned businesses in the state, Evers became an NAACP field secretary in Jackson. His civil rights work made him many enemies, and on June 11, 1963, Evers was shot and killed by white supremacist Byron de la Beckwith. His wife, Myrlie Evers-Williams, carried on his work.
http://www.infoplease.com/ipa/A0878426.html 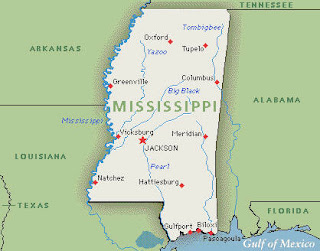