From the moment Twitter blossomed, I realized it was going to be popular as everyone seemed to be talking about it simultaneously.

I don't think many people realized how powerful it would become although a good friend (entrepreneur and technology lover) probably envisioned its potential. Here's what he wrote to me:

Twitter is a real-time microblog/public SMS that allows people to share whatever they please, unedited, in the moment. While most things are inconsequential it's proven to take the veil off events that are usually narrated by media outlets and has been used as a revolutionary tool in events such as the Iran election protests. At the end of the day it will be defined by the users-- like any new media or tech resource.

A lawyer friend added his view:

Twitter is a message multiplier and an incredibly powerful tool for communicating with people all over the wold. From issues advocates in your community, to US Senators, to journalists across the globe.

I knew I would join the Twitter craze at some point especially since I have a weekly blog www.Gswede-Sunday.blogspot.com that is near and dear to me. Like Facebook, the Twitter Platform provides a great outlet for me or anyone seeking to spread or promote a message.

I wanted to wait a bit as I tend to let new technology evolve while keeping a watchful eye on it. At no point in the Twitter era did someone close to me complain or talk negatively about it - quite the opposite actually as friends kept singing its praises.

You can search for or find me at "Gswedes" if you want to follow me on Twitter. For those people, causes or groups I find interesting, I will add them to my list of followers.

Another entrepreneur (and architect) friend had these thoughts:

Just as I’m deciding to take the time to write this email to you, I get a CNN Breaking News update about another oil rig explosion of the coast of Louisiana…again!

I had a knee jerk reaction to first send out a mass email…but I couldn’t decide who to include and who to exclude. So, I immediately thought of posting something on Facebook from my Blackberry. I have both aps on my phone by the way.

For those who may not know much about Twitter, below you will find a few paragraphs and a link from an article which provide a good description.

From its initial success, it seems that Twitter is here to stay. I'm glad to finally be a part of it.

Happy Gswede Sunday!
-----
Twitter, which was created by a 10-person startup in San Francisco called Obvious, is a heady mixture of messaging, social networking, "microblogging" and something called "presence," shorthand for the idea that people should enjoy an "always on" virtual omnipresence.

Twitter's rapid growth made it the object of intense interest and a fair amount of ridicule, as it was derided as high-tech trivia or the latest in time-wasting devices. But its use in Iran in the wake of the disputed presidential election of June 2009 to organize protests and disseminate information in the face of a news media crackdown brought it new respect. 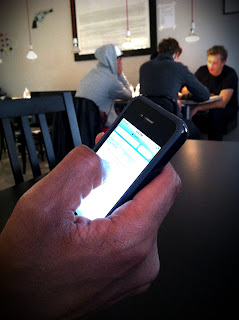 An entrepreneur friend who consistently utilizes Twitter
Posted by Gswede at August 23, 2010