Bret: A Zest For Life (and dreams unfulfilled)

As we were both hungry, Bret said he would happily make us some spaghetti. Less than a year into our friendship in the late 1980’s, I assumed it would be a typical tasting meal. Was I ever wrong!


That first mouthful was as hot and spicy as any food I’ve eaten, including a summer day in London, with a terrifyingly hot Indian dish. I was lived as I couldn’t even eat it and wondered aloud why he would make a simple meal so incredibly hot.

As I would later learn, that was a big part of Bret’s personality; passionate about cooking and creative about his style and presentation. My early scowl turned into a smile we would laugh about many times after. 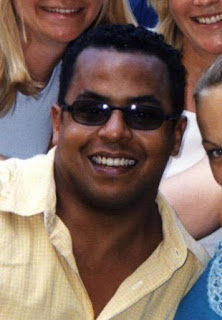 The friendship blossomed from that moment and we spent memorable times in the Boston area and on Martha’s Vineyard. Our mutual friend Sheldon (who introduced me to Bret) was the great connector of people and Bret would later follow in his footsteps – having a group of friends that was as diverse as it was deep.

Bret’s likability and fun nature was infectious, although sometimes his confidence was a bit over the top – which made me chuckle often. Back then, his smile and passion for enjoying the moment was second to none. Despite some early differences, he was one of my most appreciated friends. His zest for life was exactly what I needed, as it was a particularly challenging time for me in deciding my life direction. He, along with friends Reggie and Sheldon inspired me with their love of life; something I’m forever grateful for.

One autumn day, his step had more pep than usual and it took me some time to pry the reason out of him. He finally told me about a new friend (a woman) he met and was clearly excited; mentioning a few things about her, although only on a superficial level. There was no doubt he enjoyed her company, but I found it strange that there wasn’t much detail, as he was usually a man of eloquent description. Bret was strangely elusive and I couldn’t figure out whether they were only friends or something more.

I was happy for him though as their friendship appeared to be solid. Since Bret and I were spending lots of time together, I kept asking and asking when I would meet her, yet he always had some convenient excuse and never gave me an adequate answer on why I never came close to an introduction until 7+ years later.

When I met this mystery woman in 1994, our eyes locked and we had an immediate connection. I now understood why Bret kept her away from me for so long. Making that phone call to him about our blossoming romance wasn’t something I looked forward to. He was living in Madrid, Spain at the time and seemed to take the news in stride. I don’t know if he was comfortable about it, but as I told him later, “the forces of nature are hard to control.” He had only delayed the inevitable.

This woman is still one of my dearest friends and remained Bret’s friend until his untimely death last month. Bret adored her as much as any friend he had. I’m glad she stood by his side throughout the years, as she added a level of stability, love and joy that was more powerful than she knows.

The boldness of Bret was admirable and that was never as evident as when he suddenly decided to move abroad; the first in our inner circle to do so. His 7 years in Madrid in the 90’s – working in finance, was easily the most exciting time of his life.

Bret had numerous visitors in Spain and I couldn’t resist the invite and flew there in March of 1995. It was a week of pure pleasure. We ate late (11pm or after for dinner), went to dinner parties, restaurants and bars/clubs. The flow was magnificent and the food was fantastic. His diverse group of friends were exciting and displayed a gusto I’d rarely experienced during my previous European trips abroad. On several occasions, our night lasted until the early morning. I was never so tired after any vacation.

My Madrid experience made me think that I too may move outside of the USA at some point. Without that time with him abroad, I doubt I would have been so open-minded about moving to Sweden in 2004. My eyes opened in more ways than I had ever imagined.

Not only was Bret a superb host to me, but I heard heart-warming stories about the wonderful times others had on their visits. Bret was in his element and the pure joy he displayed was a beautiful thing to witness. I thought he might never leave Europe.

Moving to New York City (NYC) in 1998 was a thrill for Bret. He expected to conquer Manhattan finance like he did in Madrid, but the two cities are two different birds. Not everyone needs a plan for the world’s best city and throwing caution to the wind can be a viable and flourishing option. My journey however, showed me that it is better to have structure, a good network and a strong focus. Bret never quite found his footing in NYC, yet never stopped believing he would.

In 2003, white spots started appearing on his hands, and he knew fairly quickly that he had the beginnings of vitiligo (skin disorder). Bret was 38. With his life not where he wanted it to be, coupled with this new obstacle, it was a very rough time for him.

As the disease progressed, he wasn't shy about sharing the mind games that go on in one’s head when everyone is looking at you, and it was extremely difficult for him to handle during the first year (as I suspect it would be for most), however, he did come to peace with it, as he knew there was very little he could do to change it.

After years of encouragement from friends, he made that move out of NYC and settled near his mother and brother in Maryland. The adjustment wasn’t easy. Bret seemed content, yet never that comfortable in small town America.

In 2010, I was home visiting my mother in Pennsylvania when he came to see me. I invited him to two events (a 50th and 80th birthday) and we had a terrific time. He was back in his element…..charming and being the life of the party.

Our mutual friend Kevin Dowdell wrote this about Bret:

“We had lots of common friends and we enjoyed a lot of life together. He had a wild and crazy personality but also took many aspects of life quite seriously. He was sort of a renaissance man as he was a food and wine/spirits connoisseur, he loved to sail, play golf and tennis, and he had a sophisticated sense of what was right (and wrong!) in all social situations. He also loved to talk sh!t!”

The ‘renaissance man’ Kevin spoke of, also included a love of art galleries – something Bret insisted I attend when asked. At least 6 Manhattan ‘art event’ invitations came my way over the years, and I didn’t always feel like going. With his persistence, he was able to sell me on why I should go each and every time – and it worked. That salesmanship quality was something he should have used more often.

During his last 5 years, we would keep in touch over the phone, and at times, he seemed to be in a really good place. Sometimes, we would have those spirited and trash-talking moments like in the early years, yet they were few and far between.

Bret and I didn’t speak much in the last year, only emailing sporadically. When I heard his mother was sick, I knew that might be his toughest test, as they were as close as a mother and son could be. When she died last December, I sent him and his brother Paul a note of condolence and Bret wrote back via email to thank me. That was our last dialogue.

His older brother Paul and I have enjoyed a good relationship despite rarely seeing each other; corresponding over the years about Bret and our common interests. When he informed me about Bret’s passing, it was difficult to swallow the news. I couldn’t stop thinking of what could have been. Bret was only 53.
Bret did have big dreams and that is a good thing, although sometimes dreams are simply too large, unrealistic and almost impossible to fulfil. He never stopped trying though.
I’m grateful for my life and Bret Mollison has been a significant part of it. At the beginning of our friendship, nobody made me laugh harder and our conversations were as stimulating as any I’ve had. His boldness in style was something to witness, especially when he showed up to a NYC event one evening in an ascot; one of the first (and only) people I know to sport that look. He wore it well.

We spent meaningful time together and with friends in New York, Boston, Spain, Maryland, Virginia and Canada. There was rarely a dull moment when he was around and once you met Bret, you would not easily forget him. I’m thankful for his friendship.